Jen: Our friend Marisa who turned us onto Top Round strikes and scores once again—she alerted us that a hip new pho place (Phorage) serving OX TAIL PHO had opened in the old Chego space on Overland/Palms. It was strangely chilly in LA this weekend, and so I had a perfectly timed craving for soup noodles.

The space was minimally decorated, with weathered wood and grey paint, and of course de rigueur mason jars (as lighting fixtures and drinking glasses) and succulents. If you ever frequented the original Chego, now in a new home in Chinatown, you will recognize the central counter-height table and the trinket shelves.

We started with imperial rolls, which were perfectly done with just the right amount of bubbling and crackling in the fried rice paper. Next came the “broken rice bowl” with pork chop. It was quite plain, with just steamed rice, sliced pork chop and some cucumber-carrot slaw, but I did like the texture of the tiny grains of broken rice. Sometimes plain and simple really hits the spot. 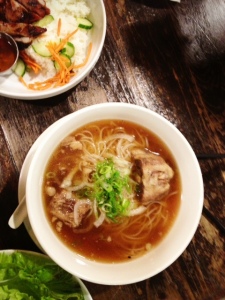 The pièce de résistance was the Ox Tail Pho. If you’ve never had ox tail, I’ll explain it like this: it basically tastes like super tender, fatty brisket. The soup was infused with the fatty ox tail and it was hearty, beefy and delicious, unlike the typical watery pho broths.

As for the drawbacks, you will pay a few dollars more ($10 for a pho bowl, $7 for the imperial rolls, $10 for the rice bowl) for the slightest bit of ambience. I also find the name annoying, since Forage is a very well known restaurant in Silver Lake, and I’m just tired of all the punny plays on “pho.” But, for the ox tail pho I’ll be back for sure (note, lack of pho pun here).

David: When i heard about Phorage a few weeks ago i already had mixed feelings about it.

Phorage took over the old chego space (a few blocks from my house), which i miss dearly, and it was opened by the ROC kitchen guys so i knew it would be slightly overpriced.

We walked in for dinner around 9pm. The crowd was very similar to that of chego. A young, mostly Asian crowd sat amongst the tables chatting about lousy dates and travel plans between slurps from their giant bowls of pho.

The space is super minimal: white walls, concrete floor with a few plants scattered around. I have to say i felt the same about the food. The pho was pretty standard. It wasn’t fatty but also wasn’t too flavorful (i’m more of ramen man myself). The only thing that made it stand out was the 2 large fatty chunks of oxtail floating in the broth. Can’t say i preferred the oxtail to my usual rare flank steak pho, but it gets points for being unique.

We also tried a broken rice bowl with pork. This was not so good. Tasted like a food court teriyaki  bowl place. I forgot i was eating pork at one point because it tasted so much like chicken.

The best thing we ate was the imperial roll. A fried spring roll stuffed with pork, mushroom, rice noodles and carrots with a side of wrapping lettuce. Jen wanted to take the last bit home but I couldn’t help popping the last two pieces in my mouth before we left.

Overall, a little pricey and a limited menu. If i’m ever in the mood for pho i’ll travel the extra mile to Pho Show on Sepulveda. Or just get ramen.