Whether you visit day (they are now serving lunch) or night, you can’t help but be blown away by the structure itself: a cube made of glass and wood that sits at the end of a park filled with olive trees that are a hundred years old. It makes a lot of sense that Otium feels almost a part of the massive art house that towers above, just outside the glass walls. The food and experience feels like as much of an artistic expression as many of the artworks inside the Broad. 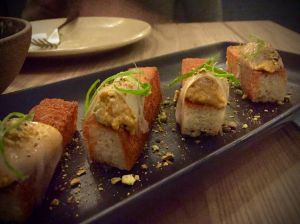 We started with three different sashimi dishes; hamachi, blue fin tuna, and sea urchin. I recommend them all but the urchin blew our taste buds away. The delicate uni was placed atop a finger-sized slice of brioche toast. Over that lay an ultra thin slice of lardo that’s brushed with truffle butter to hold a sprinkling of crushed pistachios. The whole thing melts together on your tongue until your mouth meets the soft but crisp brioche that helps soak up the flavor of it all and extends the experience of each bite to be just a bit longer, which I really appreciated.

This next dish won’t sound real but it was. A funnel cake slightly larger in diameter than a hockey puck or a small frisbee, topped with gobs of whipped foie gras and garnished with fennel and strawberry balsamic, landed with a thud on our table. I’ve never seen so much goose liver in one place. It was as frightening as it was delicious. I have so many questions about this dish. How did this combo come to be? How many ducks were involved? Am I supposed to order this for desert? Can two people eat this much foie gras? The answer to the last question is yes.

The spinach bucatini is another must. Al dente green noodles are tangled up with bits of bacon and clams, doused with crème fraiche, and topped with an egg yolk. This pasta dish did not disappoint.

I only had one cocktail since I was driving but the one I had, the “Kumquat,” was amazing. The mezcal based drink, cut with Campari and a squeeze of lemon and chili, was served over crushed ice. Mixed into the drink are several halves of super juicy and mild kumquats that are good enough to eat on their own (which I happily did).

I didn’t mention this earlier but Jen chose this place for her 35th birthday dinner. It was a night of celebration. My mouth is still dancing four days later.

Jen: One of my myriad jobs is giving tours of the new Broad museum—you know, that architectural addition to Los Angeles that’s been clogging up your Instagram feed for months now. (A tangential but still sort of food-related comment: the building, designed by the same firm that realized NYC’s High Line, is often compared to a giant cheese grater or beef tripe.) Sharing the Broad’s olive tree grove, notable for its centuries-old olive trees imported from abroad, is another establishment that you might have glimpsed on your Instagram: Otium, the sleek new restaurant from James Beard award winner Timothy Hollingsworth, formerly of Napa Valley’s French Laundry. I made reservations for my birthday last week, and it turned out to be exactly where I wanted to be to celebrate turning a year older and wiser. Otium was fancy but fun; delicious and decadent; complex and adventurous. (If you wikipedia Otium, which I’ve done here for you in this link, you’ll find that it’s a lovely and appropriate name.)

There are no categories to the one page menu, just a list of items that go from smaller to larger. From the top, we started with a couple of sashimi dishes. I don’t really have an appreciation for sashimi, but the hamachi hit all the right notes: smokey nori powder, salty avocado cream, sweet and sour marinated cherry tomatoes. The sea urchin on brioche toast was absolutely divine. Topped with lardo, a beautiful thin ribbon of cured pork fat, I felt like I was swathing my tongue in fatty buttery gold. The slightest addition of truffle oil, an ingredient that often feels trite these days, rounded out the opulent little bite.

The Spinach Bucatini with clams was equally luxurious, thanks to the generous addition of bacon and egg yolk. The lamb (pre-sliced, which I did not appreciate) was fine but mostly forgettable. Luckily this unimpressive moment was followed up by a dramatic dessert! Classic s’mores were given a very untraditional treatment. The waiter carried over a large donabe (a special Japanese clay pot) and, with a flourish, lifted up the lid and—poof!—a cloud of smoke was released. The mist settled to reveal delicate little s’mores, shaped almost like hershey kisses or kewpie doll heads. The marshmallows and the olive sable cookies, which replaced the typical graham, were infused with the earthy charcoal smoke. And with that we were content and full, and intrigued enough to want to come back again!